MONTREAL —
Jewish groups are condemning the appropriation of the yellow stars worn by anti-vaccine passport protesters in Laval on Tuesday and say it points to a lack of awareness and education about the Holocaust.

Several protesters were seen wearing the yellow stars outside the Econofitness gym in Laval, which is one of the sites in a pilot project to test the application of the vaccine passport system that is expected to be launched in Quebec on Sept. 1.

The Montreal Holocaust Museum said protesters appropriating the symbol the same way the Nazis did during the Second World War is offensive and comparisons between the passports and yellow stars “trivialize the painful history of the Holocaust.”

(2/3) This yellow star was forcibly worn by George Ehrman during the Holocaust. Jews aged six years and over who lived under the Nazi regime had to wear this badge as a form of identification. This symbol allowed the Nazis to target, persecute, and murder millions of Jews. pic.twitter.com/vKsqufEXja

“Unfortunately, we’ve been seeing the use of Holocaust comparisons, analogies and unfortunately the yellow star at anti-COVID vaccine and passport protests for a little while now, and so it’s obviously upsetting, it’s hurtful, it’s offensive,” the museum’s spokesperson, Sarah Fogg, told CTV News.

“It’s also really historically inaccurate so I think our initial reaction is one of education, we want to make sure that people are aware of what that yellow star really symbolizes, and how this is not the time to be making comparisons to the Holocaust.” 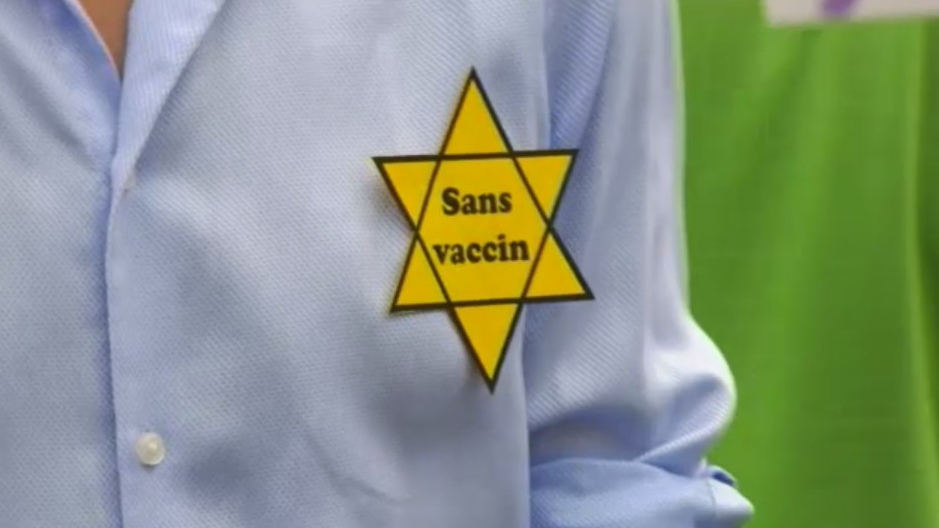 A man wears a yellow star with the words “sans vaccine” (no vaccine in English) during an anti-vaccine passport protest in Laval, Que. on Tuesday, Aug. 17, 2021. (CTV News)

Several people wore the star with “no vaccine” written in French in the centre of it while the group shouted “Je suis libre” (I am free) outside the gym. Others called the media on site “fake news.”

The Centre for Israel and Jewish Affairs also said the protesters’ behaviour was “shocking” and said drawing parallels between the vaccine passport and the Holocaust is “deeply offensive to those who were forced to wear the yellow star and suffer untold horrors and persecution.”

“The appropriation of yellow stars by anti-vax protesters trivializes the Holocaust and the lessons learned. The yellow star was a symbol of the repression of the fundamental rights of Jews in the context of a genocidal project to exterminate the Jewish people. We should all be shocked,” said Eta Yudin, the organization’s Quebec vice-president, in a statement to CTV.

“CIJA unequivocally rejects such hateful parallels that only serve to toxify public discourse on a very contentious issue. All people of good conscience should reject hateful discourse and symbols, whether directed at Jews or others. This isn’t a Jewish issue, it is a societal one, and one that must be condemned by all.”

When asked by reporters Wednesday about the yellow stars, Quebec’s minister responsible for the fight against racism, Benoit Charette, said he was “disgusted” and called it an “affront” to the Jewish community.

“It is very wrong to know our history and make some links between the repeated, organized assaults that the Jews underwent during the Second World War” and the public health measures, he said.

“We are here not only in the name of freedom, but because we refuse the Chinese social control system,” he said to a loud round of applause.

The vaccine passport is seen by many medical professionals as a potential way to incentivise those who are hesitant, boost immunization rates, and ideally help steer the country out of the COVID-19 pandemic faster. It’s also become a hot-button campaign issue in the federal election.

Richard Girgis, a member of the group called Fearless Canada / Courage Canada, which which questions and criticizes some of the government’s public health measures, disagrees.

“We are not seeing the number of hospitalizations that could possibly justify discriminatory and divisive measures such as this,” he said.

“I question the legality of the measure. I think that this measure is going to be hotly contested in court. But in the meantime it’s being rolled out regardless of whether or not it passes muster in terms of legality. In the meantime, everyday citizens have to stand up against this type of discrimination and I think that what they’re doing today is exactly that.”

With files from Amy Luft and Rachel Aiello of CTV News.