CARACAS – The socialist regime of Venezuela has begun to implement its own version of a Chinese Coronavirus digital vaccine passport in the form of a new “stoplight” restriction system through one of its existing apps.

The lack of information, improvisation, and the current state of the country following the collapse of the once-celebrated “Socialism of the 21st century” might just prevent its full deployment.

The “Access Stoplight” system, which began its deployment in November 2021, seeks to control and limit access to public spaces for the unvaccinated and to those who have recently exhibited coronavirus symptoms. In its first phase, the system is intended to be used at restaurants, hotels, and commercial establishments such as gyms.

Citizen access is determined through a “stoplight” icon based on the eponymous traffic signaling device: a “red light” for those with coronavirus symptoms, a “yellow light” for the unvaccinated but healthy, or a “green light” for vaccinated citizens. The socialist regime is using its existing veQR Android app to implement the system.

The veQR app works as a companion application to the socialist regime’s Fatherland platform, a system inspired by China’s Social Credit System and built with the assistance of the Chinese company ZTE. The Fatherland system holds an extensive amount of information of each registered citizen, such as household and workplace information. It is also used for the handing out of randomly assigned monetary stipends referred to as “Fatherland Bonuses,” as well as the assignment of monthly subsidized gasoline rations.

The Fatherland system has been recently expanded to include each registered citizen’s vaccination status.

It is worth noting that Venezuela, a socialist regime, is implementing its own spin on “vaccination passports” months before other countries. For what it’s worth, citizens have had far fewer restrictions than certain U.S. states, such as California and New York, despite being placed in a permanent state of “7+7” lockdown schema, which consists of a bi-weekly cycle of “radical” and “flexible” quarantine weeks.

The “Stoplight” app received a characteristic rocky, lethargic debut under Venezuela’s socialist regime. More than 400 restaurants signed up for the system in a timely manner but have not been able to use it because the regime has failed to offer them any relevant information.

While it’s still in its infancy, the Stoplight app faces myriad obstacles that could potentially prevent its implementation, thereby relieving Venezuelans of yet another set of draconian restrictions in their lives. The fear of scaring customers away is a latent concern for many commercial establishments, as the Venezuelan economy — or what’s left of it — is largely dependent on the once demonized “capitalistic” U.S. dollar (as opposed to the several failed iterations of the “socialist” bolívar).

The collapsed state of our public utilities is the biggest nightmare that most Venezuelans struggle against on a daily basis, but it might just be the biggest deterrent against a full vaccine passport implementation.

Venezuela is severely behind in internet connectivity and, while the easing of fierce restrictions has resulted in the introduction of new private Internet Service Providers, most of the country has no choice but to rely on the regime’s CANTV internet provider – which, suffice to say, is extremely poor and deficient.

Implementing any form of digital vaccine passport in a country plagued with endless blackouts and with extremely deficient (and in many cases, antiquated) internet connectivity is quite a difficult obstacle to overcome. To make the point: a widespread CANTV internet outage got in the way of writing this article.

For years, Venezuelans haven’t had the ability to choose when it comes to many aspects of their lives and, if the Stoplight app ends up being a success, it would be one more set of restrictions that would prevent them from choosing to be vaccinated or not.

Venezuelan citizens who decide to get vaccinated against Coronavirus don’t even have much of a say on the type of vaccine they receive, as all of the available ones come from allies of the Maduro regime. The majority of the adult population receives China’s Sinopharm product or, in certain cases, the Cuban regime’s Abdalá “vaccine” instead. The Elderly (60 years old or older) receive Russia’s Sputnik-V vaccine. 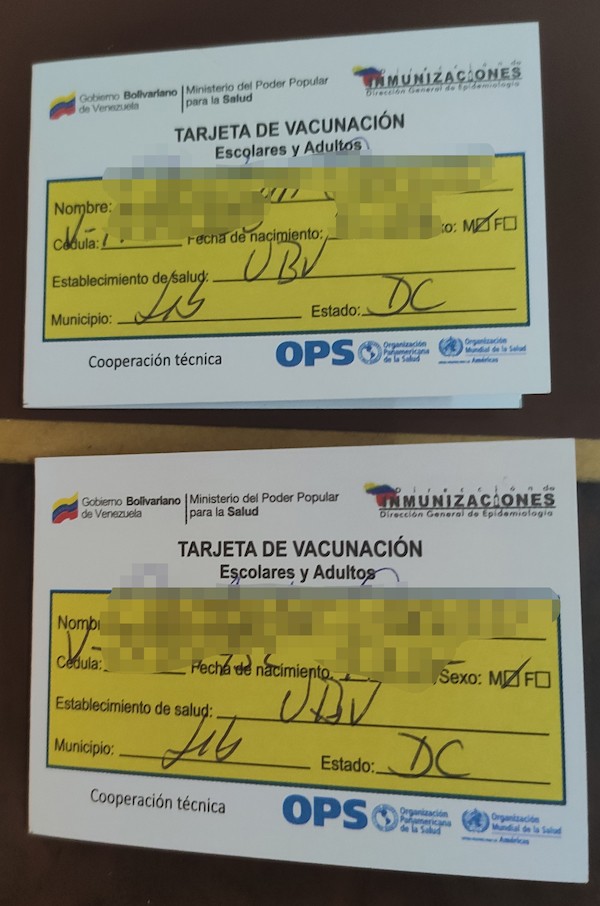 Whether the Stoplight app completes its deployment or is further expanded to contain the unvaccinated – or if it ends up as yet another failure of the socialist regime – remains to be seen. No one here will be surprised if the entire project gets abandoned halfway through. It would not be the first time the socialist regime spends resources on implementing restriction systems only to partially implement them or ditch them altogether because they don’t work. One such example is the now abandoned chips installed in vehicles to control gasoline distribution nearly a decade ago in “troublesome” states such as Zulia and Táchira.

Regardless, the stoplight app might serve another purpose: to push, or rather, coerce more people into signing up for the socialist Fatherland system, an indispensable requirement of the system (alongside being vaccinated) to be granted a “green light.”

Christian K. Caruzo is a Venezuelan writer and documents life under socialism. You can follow him on Twitter here.