Singaporean and friends detained in Malaysia for 7 days over unstamped passports, Singapore News

May 28, 2022Singaporean and friends detained in Malaysia for 7 days over unstamped passports, Singapore News 0 Comments

A recent road trip to Malaysia ended on a sour note for a Singaporean and his friends.

On their way back to Singapore, they failed to clear customs at Johor Bahru (JB) and were detained for a week and slapped with a 3,000 ringgit (S$930) fine each.

According to Shin Min Daily News, the group of five friends aged 25 to 27 drove into Malaysia on May 7 and spent five days in JB and Kuala Lumpur.

While one of them flew back to Singapore with no issues, the remaining four — one Singaporean, two Permanent Residents and one Malaysian — were stopped at the checkpoint in JB on May 11.

The customs officer told them they’d be detained for offences under Malaysia’s Immigration Act because their passports were not stamped on entry and that there were no entry records.

Horrified, the Singaporean called his father for help, who in turn called the Consulate-General of the Republic of Singapore in JB.

The father was only able to see his son on May 13.

“When I saw my son in handcuffs, I was heartbroken,” he told the Chinese evening daily. 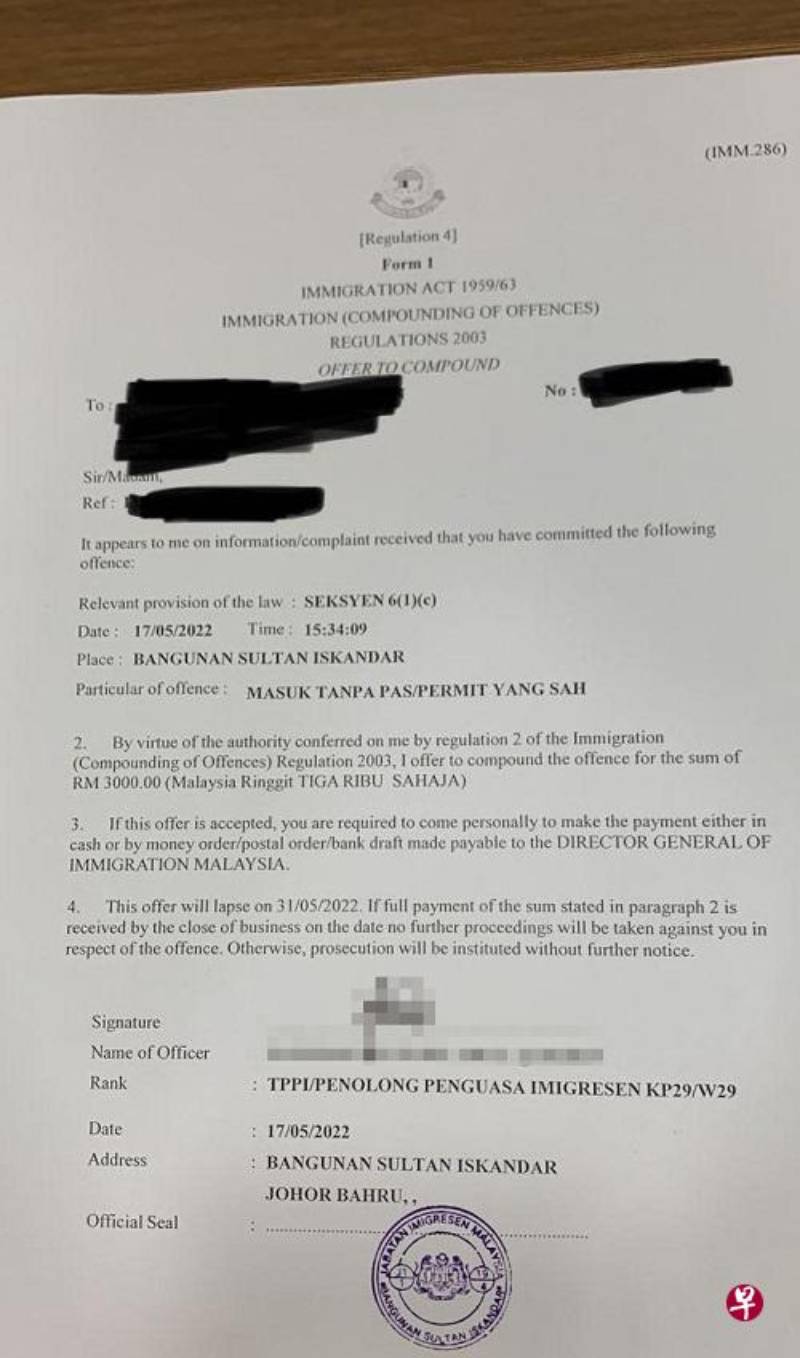 The Malaysian in the group was allowed to return to his home in JB and make a statement at the checkpoint on May 16, but his companions were only released from detention on May 17.

Upset about this incident, the Singaporean said: “Before we were detained, we told the officials that we did not check whether our passports were stamped when we were entering Malaysia”.

According to Chua Jian Boon, deputy chief of the National MCA Public Services and Complaints Bureau, this isn’t the first time this has happened.

Chua reminded travellers entering Malaysia that their passports must be stamped. If there is no customs officer at the counter, travellers should go to the immigrations office for assistance, Chua told Shin Min.

In a Facebook post on May 23, the Singapore High Commission in KL and Consulate-General in Johor Bahru similarly reminded travellers: “Do not leave the Malaysian immigration booths without the entry and exit stamps as that will constitute an offence under the Malaysian Immigration Act”.

Earlier this month, a customs officer allegedly asked a Singaporean family for ‘coffee money’ after they passed a checkpoint in Johor Bahru without stamping their passports.