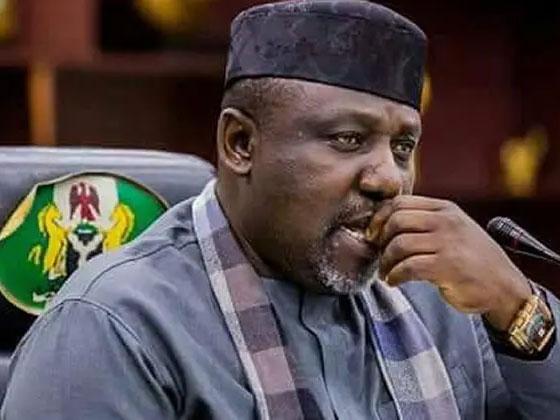 •Thanks Nigerians for their support

The Federal High Court sitting in Abuja, yesterday, granted bail to the detained former governor of Imo State, Rochas Okorocha, to the tune of N500million with one surety in like sum.

Trial Justice Inyang Ekwo okayed Okorocha’s release on bail after he dismissed a counter-affidavit the Economic and Financial Crimes Commission, EFCC, filed against him.

EFCC had through its lawyer, Mr. O. C. Ugwu, urged the court to allow the former governor to remain in custody, alleging that he posed a flight risk.

The prosecution maintained that Okorocha not only breached the administrative bail it earlier granted to him but equally made himself inaccessible, a situation that led to his forceful arrest on May 24.

It told the court that the erstwhile governor, who is facing a 17-count money laundering charge, can interfere with some of its proposed witnesses.

“My lord, on two consecutive occasions, the 1st defendant (Okorocha) frustrated his arraignment by refusing to appear in court,” EFCC’s lawyer added.

However, counsel to the defendant, Mr. Solomon Umoh, SAN, assured the court that his client would be available to face his trial.

The defence lawyer stressed that his client, being a responsible citizen and a presidential aspirant, would not conduct himself in any manner that would undermine the sanctity of the court.

He, therefore, begged the court to release him on bail on self-recognizance or in the most liberal terms, noting that the charge against him contained bailable offences.

More so, Umoh, SAN, argued that it was within his client’s constitutional right to be presumed innocent until the allegations against him are established by the EFCC.

“My lord, the applicant is a man that is well known in this society. Therefore, the prosecution’s contention that he could not be reached for the charge to be served on him is not true as he could have been served through substituted means,” Umoh added.

In his short ruling, trial Justice Ekwo said he was minded to exercise his discretion in favour of the defendant.

He ordered the defendant to produce one surety that must be a responsible citizen and owner of landed property in Abuja worth the total bail sum.

The trial judge held that the surety must deposit the original title documents of the property with the Registrar of the court for verification, even as he ordered Okorocha to surrender all his travel  documents and not leave the country without permission.

He directed the Court’s Registrar to write to the Nigerian Immigration Service, NIS, notifying it about the seizure of the defendant’s passport and the need for him to always secure permission before traveling out of the country.

The court held that the defendant must remain in the custody of the EFCC, pending the perfection of all his bail conditions.

Likewise, the court also gave bail to the 2nd defendant in the matter, Mr. Anyim Nyerere Chinenye, who is a chieftain of the ruling All Progressives Congress, APC, on terms of the administrative bail the EFCC earlier handed to him.

Justice Ekwo subsequently adjourned the matter till November 7, 8, 9, 10, and 11 for trial.

EFCC alleged that the defendants conspired and diverted funds belonging to Imo State, to the tune of about N2.9billion.

The anti-graft agency alleged that the defendants sequentially siphoned funds from the Imo State Government House account and Imo State Joint Local Government Project account, and diverted same into accounts of private firms for their personal use.

According to the prosecution, the alleged offence was committed between October 2014 and February 2016.

However, the defendants took turns and pleaded not guilty to the charge.

Okorocha, who is currently the Senator representing Imo West, earlier declared his intention to contest for presidency in the 2023 general elections.

He was however arrested by operatives of the agency, a few hours before the time his political party, the APC, was initially slated to screen its presidential aspirants.

The arrest of the former governor followed his alleged refusal to make himself available for trial.

EFCC alleged that he deliberately evaded service of the charge on him.

An online report had alleged the Attorney General of the Federation was included in   Okorocha’s suit for bail application and N1 billion damages demanded over the alleged invasion of his private house in Abuja by the officials of the Economic Financial Crimes Commission, EFCC.

According to a statement by his Media Adviser, Sam Onwuemedo,”Senator Rochas Okorocha has been in EFCC custody since the agents of the commission stormed his house and arrested him. The Commission took him to court on Monday, May 30, 2022, with other accused persons in the matter. The Presiding judge, in his wisdom, adjourned the matter to Tuesday, May 31, 2022, for Okorocha’s bail application to be taken or heard.

“We were concerned with the expected hearing of the bail application today when our attention was drawn to the online stories of N1b suit and engagement of 5 SANs. Okorocha has no reason to take either the Attorney General of the Federation or the office of the Attorney General of the Federation, to court and claim 1b damages over the invasion of his house since the incident had nothing to do with the AGF or his office.

“lf Okorocha comes out of detention and   decides to take legal action to press for damages, over the invasion of his residence, he knows those who acted. We do not think he would include the AGF’s office. We know some patriotic Human Rights Lawyers in the country and some of them, highly respected SANs have been of immense help in dealing with human rights violations in the country, most of the time, on their own to help the society.

“We are therefore sure that the renowned Senior Advocates mentioned in the online stories might have been challenged by the invasion of Okorocha’s private residence by agents of the EFCC and might have also decided to take the bull by the horns.

“If Okorocha comes out of detention and decides to walk in that direction, fine. But one fact would be made clear and that is, that the AGF and the office of AGF would not be part of the action because they had nothing to do with the invasion of Okorocha’s private residence.

“We have  to keep the record straight. We are looking forward to seeing Okorocha out of detention by the Grace of God and the magnanimity of His Lordship handling the case.”

I thank Nigerians for their support —Okorocha

Okorocha also  thanked Nigerians for their support hours after he was granted bail by Justice Inyang Ekwo.

He said: “We want to inform the general public that Justice Inyang Ekwo, of the Federal High Court Abuja, has graciously granted bail to  Senator Rochas Okorocha. His Lordship, in his wisdom, granted Okorocha bail on Tuesday, May 31, 2022,( yesterday).

“Okorocha had remained in the custody of the Economic And Financial Crime Commission, EFCC, since the invasion of his private residence and subsequent arrest. He was taken to court on Monday, May 30, 2022, with five others, over alleged N2.9 fraud. He pleaded not guilty to the charge.

“We thank God for this juicy and lofty development. We thank Nigerians, within and outside, who had continued to send correspondences to show concern, over the fate of the foremost African philanthropist. We remain grateful for their genuine concern.”

“We also thank those who had devoted their precious time to prayers, for GOD’S intervention. Most importantly, our gratitude goes to justice Ekwo, who had seen the efficacy of granting bail to the Ogboko born enigma.

“Equally, we pray that the Almighty God would bless the astute lawyers handling the case, immensely. They have remained wonderful. We ask God to show love to the leadership and officers of the EFCC and grant them their heart desires,” Okorocha said.