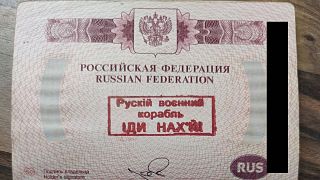 The passport stamp was added at the Ukraine-Romania border on August 15.

Ukrainian border guards have been accused of stamping a Russian man’s passport with the words “Russian warship, go f*** yourself”.

Igor Zabotin says he was turned away at the Romania-Ukraine border on 15 August and had his stamp marked with the phrase.

The words were famously said by Ukrainian border guards on Snake Island at the very start of Russia’s invasion in February. The men prompted international attention by swearing and defiantly refusing a Russian warship’s demands to surrender.

Zabotin shared images on Facebook of his Russian passport, and an undated stamp with Cyrillic words on the page next to his identity details.

He says that the stamp was added to his document by “Ukrainian border forces” when he tried to cross the Porubne/Siret checkpoint in the southern Ukrainian region of Chernivtsi.

“I left the Ukrainian border after all procedures and before Romanian customs, I prepared my papers and opened my passport,” he told Euronews.

“Nobody told me anything on the Ukrainian border. Militaries or customs, I don’t know who did [it] exactly.”

The State Border Guard Service of Ukraine has not responded to Euronews’ requests to comment on this case.

In another post on Facebook, Zabotin says he was initially denied entry to Romania because of a visa issue.

“I passed the first [border post] alive and well. The second one, [I] was not allowed in, despite all official statements that they would let in third-country nationals with Ukrainian residence permits and who were there during the war.”

He then says that he was made to “spend the night” between the two countries borders — reminiscent of the Tom Hanks film “The Terminal”.

“The Ukrainian customs officers took my passport and told me to spend the night near the duty-free shop at their checkpoint,” he added on Facebook. “A Ukrainian border guard came up and sent me to a neutral strip.”

Zabotin told Euronews that he has since crossed into Romania via another border post and is “safe” and is applying for “temporary protection”.

Romanian Border Police have told Euronews that the stamp was not applied to Zabotin’s passport by their guards.

“In case a foreign citizen who does not meet the legal conditions for entry into the country … the person in question shall not be allowed to enter the country and shall be given a form stating the reasons for the measure and how to appeal,” a statement read.

They also confirmed on Twitter that they did not apply the Cyrillic stamp, dispelling online misinformation.

‘There is no Nazism in Ukraine’

Zabotin now works in internet marketing after previously being employed with the independent Russian media, The Moscow Times.

He states that he moved to Ukraine from Barnaul, Russia, in 2015 and has been living there legally for seven years.

Following Russia’s invasion, he has tried to leave the country but says he became trapped between Romania and Ukraine. He has also shared anti-war posts on social media that contradict Russia’s claims about Ukraine.

“The fact that I drove through central and western Ukraine with Russian number plates is direct proof that there is no Nazism here and there was no reason to start this war,” he wrote on Facebook.

“There is no Nazism in Ukraine, never was and never will be, no matter how hard the Kremlin propagandists try,” he added.

The Kremlin had claimed that it launched a “special military operation” in Ukraine to “demilitarise” and “denazify” the country.

Russian citizens face heavy fines or up to 15 years in prison if they intentionally share so-called “fake news” about the country’s military, or its entities abroad.