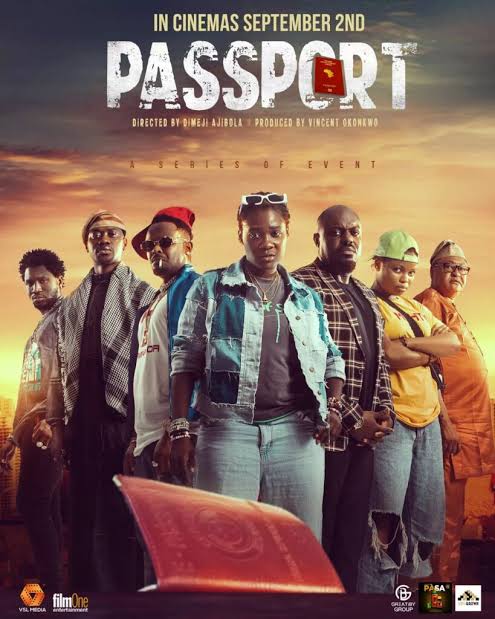 When you glance at the posters or watch the trailers of the Nollywood movie, ‘Passport,’ you might begin to have high expectations.

While the film wasn’t extensively promoted or raved about on social media, something about Passport’s poster, along with its synopsis and cast line-up, has a way of gaining one’s attention.

However, “dashed hopes” and “disappointed” are two accurate words to describe the feelings you might experience after watching the movie.

Although the premise of ‘Passport’ is similar to the 2018 Hollywood film ‘Games Night’, which involves a group of friends racing against time to achieve a goal, the film couldn’t keep the audience entertained in suspense.

In addition to its lack of humour and complex layers, ‘Passport’ is one of those Nollywood movies that leaves you itching for it to end soon.

It doesn’t shy away from exploring some themes, such as the quest for identity, the importance of family, and, most importantly, the social class system.

At the movie’s beginning, we are introduced to Oscar (Jim Iyke), the perfect description of a privileged man who has never worked a day.

After being rejected by his girlfriend and receiving a call about his sick mother, he plans to return to London, his home.

On his way to the airport, two teenagers rob him. Among the stolen items is his passport, a prerequisite for travelling abroad.

With the help of his uncle (Jide Kosoko), he tracks down Kopiko (Mercy Johnson-Okojie), who is related to one of the teenagers.

She decides to help them find the passport after several refusals.

Pushing their differences aside, they embark on a quest to find the passport, leading them to face a common enemy called the Terminator.

As mentioned earlier, the premise is intriguing. While there are a lot of movies out there with a similar storyline, ‘Passport’ puts a more Nigerian spin on it, making it local and relatable.

The cinematography of this film shines bright as the scenes are visually appealing.

Although, at some points, the lighting felt off, it was an average effort well done. Locations are an applaudable part of the film, especially the “ghetto” areas where many events happen.

It was evident that a lot of effort went into scouting these places.

With a line-up of talented individuals like Mercy Johnson, Jim Iyke, and Jide Kosoko, one can only expect the best.

And even though they did not deliver the best, they did an excellent job portraying their characters.

First, the movie felt flat. The passport made it seem like a boring Instagram comedy skit that dragged on for too long.

The film had no depth, layers, or higher stakes — basically nothing to keep viewers on the edge of their seats. Each scene was anticlimactic, and it felt like they chopped off the exciting parts in the editing room.

As if the light effect of the film wasn’t enough, the actions and dialogues of the characters are predictable. The only unexpected thing was a character getting shot, which looked cringy and served zero cinematic purposes.

There are also some issues with the casting choices.

The actor who played Jim Iyke’s sister had problems faking a British accent; there was bland chemistry between Mercy Johnson and Jim Iyke’s character; and most importantly, Zubby Michael’s unconvincing role as the bad guy.

Unlike in the previous movies, where Zubby plays a potent antagonist, his performance in ‘Passport’ felt unthreatening and soft.

The best way to summarise the negative criticism of this film is to say that the script is terrible. Again, dear producers, please invest in good writing. Many dialogues contributed nothing to the plot development and were repetitive.

A good example is about fifty per cent of the words Mercy Johnson says to Jim Iyke.

Before we forget, there is a problem with the sponsor’s product placement. While we get that films get production funds from brands in exchange for advertising, the producers of the Passport overdid this . If viewers want you to shove product advertisements in their faces, a Youtube ad is one click away.

5/10. ‘Passport’ might have several shortcomings, but the storyline is a breath of fresh air in Nollywood.

The passport is showing in Nigerian cinemas.

Among Nigeria’s numerous national challenges, which do you think the next president should focus on first?

Good journalism costs a lot of money. Yet only good journalism can ensure the possibility of a good society, an accountable democracy, and a transparent government.

For continued free access to the best investigative journalism in the country we ask you to consider making a modest support to this noble endeavour.

By contributing to PREMIUM TIMES, you are helping to sustain a journalism of relevance and ensuring it remains free and available to all.